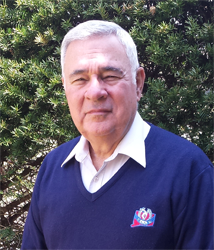 On June 29, 2021, Rich Marazzi, Baseball Rules Consultant and Author, along with his wife, Lois, met with Sister Barbara Johnson, FSE, Executive Director, Franciscan Life Center, and Sister Suzanne Gross, FSE, Administrator, Franciscan Home Care and Hospice Care, at the Franciscan Life Center.  During this conversation, the Sisters learned how well Rich knew Arnold Dean, for whom the Franciscan “Dean of Sports” award is named. His Silver Sluggers group is an opportunity for his peers to feel like they are “12” again as they remember favorite baseball plays.

Rich is this year’s recipient of the Dean of Sports Award at the 35th Annual Franciscan Sports Banquet and Silent Auction on October 18, 2021, at the Aqua Turf Club. Rich is a Rules Consultant for twelve professional teams including the Red Sox, Yankees, Blue Jays, Royals, Mariners, and Padres. He is also a rules columnist for Baseball Digest and Collegiate Baseball, as well as an author of numerous books.

Tymeek Williams, R.N., BSN, joined the hospice care team in 2020. His BSN degree is from Old Dominion University, Norfolk, Virginia.  Most of Ty’s nursing career has been in home health care.

Barbara Doherty, RN, is a per diem hospice nurse. She has been with the agency since 2020.  Prior to her employment with the agency, Barbara was caring for her own loved ones during their dying process.

Brenda Navarro graduated from Colombia College. She has been a nurse since 2003 and has worked in home care since 2006. She is fluent in both English and Spanish, which enables her to communicate effectively, support patients, and ensure they have good access to health care. She values being able to make home health accessible to all in need of care.

Typical work hours are Monday through Friday daytime and some weekend rotation, typically one per month. Job Type: Full-time

A graduate of Quinnipiac University, Michelle has worked in inpatient rehab/skilled nursing and in a school setting helping children with intellectual and developmental disabilities.

Susanne is a graduate of Southern Connecticut State University.  Prior to working for Franciscan Home Care and Hospice Care, Susanne was a nurse with the Meriden Health Department.  When asked why she chose home care, she replied, “I have a history of home care work and missed hands-on nursing.”

Agnes Dion, R.N. joined the Franciscan Hospice Team in 2012. She graduated from St. Francis School of Nursing and spent most of her homecare experience at the Greater Bristol VNA. Agnes was looking for a Catholic agency to do hospice work and found Franciscan as a natural fit. Agnes believes someone should choose Franciscan Hospice Care for their loved one because of the excellent care and loving, friendly staff. “Your worth is recognized and appreciated here.”

Barbara Raby, RPH, became part of the Franciscan Hospice Team in 2008 serving as the pharmacist. She earned her degree from Massachusetts College of Pharmacy and has worked for local pharmacies for over 35 years. She truly believes in the spiritual support that Franciscan Hospice has to offer through its great, caring staff. “I would recommend Franciscan Home Care and Hospice to everyone!”

Sister Catherine Mary Clarke started working at Franciscan Home Care and Hospice Care in 2006. She received a B.S. degree in Natural Science and worked as a naturalist at the National Seashore. Sister Catherine Mary obtained her Masters of Social Work from UCONN, which first led her to Gaylord and then to Rome, Italy, co-founding the Coordinator of Hospice Team position at Sacred Heart Clinic. Sister Catherine Mary lives the Franciscan mission to serve all people from our Catholic perspective of the dignity of every human life. “All deserve the care and preparation that helps bring them to their deepest peace.”

Sister Suzanne Gross, FSE, has served as the administrator of Franciscan Home Care and Hospice Care since 1987. She serves in this ministry as a Franciscan Sister of the Eucharist. Prior to starting and building this faith-based agency, Sister was the administrator of the Curtis Home Saint Elizabeth Center, which she helped build, in Meriden. Sister is the Pro-Life Coordinator for the Archdiocese of Hartford at the Franciscan Life Center. She was a past president of the Connecticut Coalition to Improve End-of-Life Care and presents on aging, end-of-life issues, human suffering, and the culture of life at various conferences around the United States.
Sister Suzanne graduated from Loyola University in Chicago and holds a Master’s Degree in Public Administration from the University of Hartford and a Master’s Degree in Theology from Holy Apostles College and Seminary.

Since 1990, Sister Mary has served as the finance manager for Franciscan Home Care and Hospice Care as well as the Franciscan Life Center, and since 2010, Franciscan Ever There Care. Prior, Sister worked as a caseworker for Catholic Family Services; a bank manager for American National Bank; and business manager at The Mary Wade Home.

Sister Mary has a BS degree from Loyola University, a Master’s in Education Counseling and a MBA from the University of Hartford.

Gretchen has a 30 year history as the director of community education for Franciscan Home Care and Hospice Care. She has a BA in psychology from Albertus Magnus College, New Haven, and a MA in Corporate and Political Communications from Fairfield University, Fairfield, Connecticut.

Anna Kurtoglu graduated from Goodwin College with an associate’s degree in nursing. She has been a nurse since 2012 and has worked in home care from the beginning. She spent three years working for Franciscan Home Care as a field staff nurse. As the nursing supervisor, she enjoys providing support to the field clinicians, to ensure the patients have a seamless transition to home. It is the goal as a team, to develop a plan of care that meets the spiritual, physical, psychological, emotional, and social needs of our patients.

Colleen Hesbach graduated from Capital Community College with an associate’s degree in nursing and received her bachelor’s degree in nursing from Central Connecticut State University. She has been a nurse since 2001 and has worked in home care since 2015. She loves taking care of her 4-year-old twin boys. Her commitment to her patients is to keep them safe and happy at home.

Kristine Zullo graduated from Naugatuck Valley Community College, has been a registered nurse since 1996, and has worked in home care since 2008. Working in home care allows her help patients assimilate their care needs successfully so that they can flourish in their home setting.

Fran Mahoney graduated from Gateway Community College in 2015 and has worked in home care since 2016. Home health care nursing has become a specialty in which she both excels and enjoys.

Krista Petrosky has been a registered nurse since 2012 and has worked in home care since 2013. Krista’s clinical expertise includes wound care and advocating for the needs of the patients. Her personal interests include anything family oriented. She enjoys working for Franciscan Home Care and Hospice Care because it is a wonderful working environment that allows staff to collaborate to provide the best possible care.

Lisa Cox holds a BSN degree from Southern Connecticut State University. She also has a B.A. in English and an M.B.A. in marketing. She has been a nurse since 2012 and has worked in home care since 2014. She enjoys working with the geriatric population and has found Franciscan Home Care and Hospice Care a great place to work. In her spare time, she enjoys gardening.

Doreen Notarfrancesco graduated from the St. Vincent College in 2005 and has worked in home care since 2010. She has experience in cardiac critical care and caring for traumatic brain injured patients. She prides herself in successfully being able to transition patients from the acute care setting back to their home. The philosophy of care and values of the Franciscan Sisters of the Eucharist is the reason she chose to work for Franciscan Home Care and Hospice Care.

Sister Faith Marie is a graduate of Grand Valley State University, Grand Rapids, Michigan. She has been a full time physical therapist with Franciscan Home Care and Hospice Care since 2014. In 2015 she became LSVT Big certified in order to work more effectively with people who have Parkinson’s disease and other neurological disorders. “It is a gift to be able to work in an environment where the dignity and needs of the patient truly come first.”

Mary Alice Rossini, R.N., has been working as a per diem nurse for the Franciscan Hospice Team since 2016. She has her B.S.N. and has worked extensively for hospices in Long Island ensuring quality end of life care. Mary Alice embodies the Catholic philosophy and mission of Franciscan that nurtures the spiritual care of the individual. “It is awesome to witness the miracles that happen so frequently in light of difficult occurrences in individual’s lives.”

Jan Louiselle, R.N., joined the Franciscan Hospice Team in 2010. She earned her nursing degree from Wilcox School of Nursing and has had many different roles, but truly believes that hospice nursing is her passion. According to Jan the God centered, compassionate approach to care from Franciscan that meets the person where they are is what is most important. “As a cancer survivor I understand that journey and the physical and emotional toll it may take.”

Laura Borrelli, R.N., started working at Franciscan Home Care and Hospice Care in 2008, becoming the Hospice Director in 2010. She earned her B.S.N. from UCONN and has done hospice care for over 30 years. She is an end of life nurse educator and is the recipient of the Safe Passage award in recognition of her outstanding clinical contributions to end of life care. Laura believes that we are all spiritual beings on a physical journey and that Franciscan Hospice supports the whole individual. “Dying is like birthing. It is a deeply personal, natural process that takes time.”

Karen Christensen, LCSW has been serving as a social worker for Franciscan Home Care and Hospice Care since 2011. She holds a BA degree in sociology and gerontology and a MSW in social work from the University of Connecticut. Karen has held positions at MidState Medical Center and in the Neuromuscular Clinic at the Hospital for Special Care prior to working in home health care.

Marie Laffin, RN has been serving as the Clinical Director of Franciscan Home Care and Hospice Care, a faith-based home health agency rooted in a philosophy of care centered on the dignity of the human person and the sacredness of human life, since 2008. Marie received an Associate Degree in Nursing from Quinnipiac University and a Bachelor of Arts Degree in Psychology from Providence College. The past 30 years of her nursing career have been in the home health field, where she has held the positions of primary care nurse, quality improvement manager, and clinical supervisor. Prior to working in home health care, she worked at the Hospital of Saint Raphael in New Haven.

Rebecca is a graduate of Misericordia University with a Master of Science and Doctorate in physical therapy. She worked for eight years at Gaylord Hospital before joining Franciscan Home Care and Hospice Care in 2016. She likes working for a Catholic, faith-based organization that cares about each individuals person in every aspect.

Pam Speeno is a graduate of Russell Sage College. She worked in acute care and short term rehab before starting in home care in 2001. She joined Franciscan Home Care and Hospice Care in 2005 and appreciates the agency’s devotion to quality care with holistic approach. She became certified in LSVT Big in 2016 in order to work with patients with Parkinson’s disease and other neurological disorders.

Stephanie Crump is a graduate of Quinnipiac University. She began her homecare career in 1993 at the VNA and began working at Franciscan Home Care and Hospice Care in 2012. “Franciscan Home Care is a special agency that provides excellent care and has a team approach.”

Kathleen is a graduate of the University of Connecticut. She worked at Gaylord Hospital and MidState Medical Center before starting at Franciscan Home Care and Hospice Care in 1999. “Our agency is a special place because we take the time to fully understand all our patients’ needs and address them individually.”